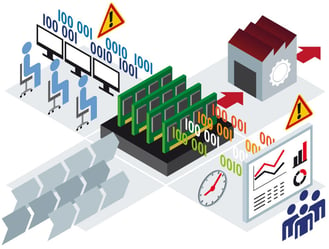 These days, when most people think of automation, one of their first thoughts is of self-driving cars. What many people don’t realize, as they picture themselves magically napping away their morning commutes, is that when it comes to autonomous vehicles there are actually six levels of autonomy. At level zero, you have a standard automobile, which requires the driver to make every decision and maneuver. At level five, the car itself makes and carries out all of the decisions without any human intervention. In between, we find cars that can maintain speed and avoid other cars on the highway, cars that can change lanes and make turns unassisted, and cars that can perform automated interventions in crisis situations like potential spin-outs.

As it is with autonomous cars, so too is it with the autonomous supply chain. Many prognosticators have been predicting an so-called “self-driving” supply chain for years, but between that and today’s supply chains there will be a number of intermediate levels with varying degrees of autonomy. Let’s take a look at some of the ways in which the modern supply chain is incorporating automation:

One of the most intriguing automated workflows that is already becoming a reality for many supply chains is autonomous decision-making. This can take many forms, from machinery self-correcting after an error to advanced software platforms automatically planning and re-planning complex processes like job shop scheduling or inventory restocking. However it’s implemented, this type of automation relies heavily on manufacturers’ ability to centralize data from all touchpoints on the value chain, and to make that data visible throughout the entire operation. In this way, advanced analytics processes make it possible to execute crucial tasks with an added level of efficiency, often creating a cascade effect throughout the value chain.

For example, smoother inventory management that accounts for ongoing shifts in demand and production capacity could lead to more streamlined load and unload workflows at warehouses, leading in turn to a more efficient transport logistics process (and thus a reduction in transport costs). By the same token, automated scheduling in a job shop or other non-timed production environment could create less rigid planning paradigms for what have historical been very complex scheduling environments. When a disruption occurs, an automated planning process takes the guesswork out of minimizing losses and keeping operations running smoothly, meaning that the flexibility inherent in non-clocked production environments can be leveraged into a value-added proposition. Under these circumstances, planners could incorporate more product customization into their workflows, knowing that the automated scheduling workflow can handle the increased complexity and variability, even in the face of the unexpected.

If autonomous decision-making processes represent a paradigm that’s already taking hold in large swaths of the global supply chain, robotic automation is in some ways a logical next step as we look further out towards the horizon. This isn’t to say that there are no manufacturers or supply chain managers utilizing robots for simple tasks right at this moment, but rather to suggest that this technology builds off of the kind of autonomous planning workflows that are just now starting to make a big impact. Think about it: how could robots bolster the efficiency of, say, the inventory stocking process if human planners still had to decide on all of their actions for them?

Once these autonomous decision-making processes are in place, robotization will gain popularity over and above its current levels of usage. Through added integration with internet of things (IoT) devices and other characteristic elements of the Industry 4.0 value chain, robots of various degrees of complexity will help to handle inbound and outbound logistics processes, receiving notifications from order fulfillment systems and carrying out tasks like replenishing specific parts or moving containers around a yard. Moving beyond logistics, there are some who are considering the possibility of utilizing robots for quality control processes, theorizing that by using machine learning and computer vision robots could scan large quantities of items much more quickly than a human possibly could.

At this point, the value of the kinds of automation described above should be fairly obvious. A quicker quality control process means that goods can be shipped more efficiently, shortening lead times and moving towards a leaner supply chain. Smoothed out planning workflows will help supply chain managers to better respond to disruptions and bottlenecks, thereby preserving value in the face of supply chain events. And yet, they don’t answer the question of what a “self-driving” supply chain would really look like. It should come as no surprise, given the way this article started, that one of the most important capstones of the autonomous will be—you guessed it—autonomous vehicles. We’ve seen the ways in which human intervention can become less necessary on the factory floor (freeing up planners’ time for more long-term, strategic visions), as well the warehouse. But what comes next? Once the goods have been produce, it’s time for them to make their way to the customer—which they’ll do in vehicles that don’t require any human intervention. Instead, the shipping fleets of the autonomous supply chain will drive themselves, relying on alerts from transport logistics software for any warnings about traffic and weather.

When the goods reach their destination, they can be offloaded by robots, with the resulting inventory fed into a centralized database that can turn that data into powerful business insights. In this way, the supply chain begins to function in such a way that goods can travel across multiple points on the value chain without requiring any human interaction. While this reality might still be a long ways off, the foundations are already being laid by today’s analytics-based planning automation.

How Autonomous Vehicles Could Impact the Automotive Supply Chain

Is Your Factory Ready for Industry 4.0?

How Will Autonomous Vehicles Change Manufacturing?