The Benefits of Industry 4.0 in Production Planning 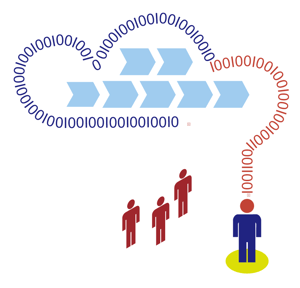 Let’s say you have to schedule a medium-sized meeting with some of your coworkers. If you’re a traditionalist who likes to do this kind of scheduling by hand, you’ll first need to brainstorm a list of which people (i.e. which creative and organizational resources) will need to be in attendance. Then, you’ll have to pick a time that works for you, and check with each person on the list to see if that time also works with their schedules. In the extremely likely event that the time does not work for everyone, you’ll need a master list of everyone’s availabilities so that you can find a time slot that works for everyone. Or, if not everyone, then at least the largest possible number of vital attendees.

Now, what happens if you take a less traditional approach? You create an event in your calendar, and whatever (sufficiently sophisticated) corporate software suite you’re using suggests a set of likely invitees. Then, based on what’s on everyone’s calendars, the software suggests some potential time slots that would work for the largest number of people. Now, let’s take that same dichotomy and apply it to the world of manufacturing. If the first method represents traditional production planning, the second, more sophisticated one might be analogous to production planning in an Industry 4.0 environment.

One of the most significant changes being brought about right now by the Industry 4.0 revolution is the sheer increase in data and information transparency across the entire supply chain. Previously, the bill of materials associated with any given production program might be inexact, vague, and difficult to access for all but the few who had access to the files or physical documents in which that information was stored. Now, the use of RFID chips and IoT device, not to mention advanced ERP solutions that prioritize visibility and interoperability, means that in a truly Industry 4.0-enabled production environment, each product or part that needs to be produced can and should have a legible bill of materials that’s accessible in an open, digital environment across all touchpoints on the value chain.

At this point you might be wondering: so what? Well, given this new transparency, manufacturers can gain a new sense of perspective and control over their production plans. It becomes possible, for instance, to plan for every part; just as it becomes possible to maximize your throughput and capacity management by gaining a clear sense of where your mission critical stock ends and your buffer stock begins. Rather than continuing to make the same parts orders from your suppliers month after month, you can gain the necessary information to start fine-tuning those orders to reflect the realities of your production plans, potentially saving money and gaining agility in the process.

You might notice, as you continue to read this article, that many of these benefits seem to have cascade effects. This is no accident. Rather, Industry 4.0 systems operate on the principle that small increases in efficiency and minute process improvements can, over time, have a radical impact on a given organization. Case in point, the increase in visibility and transparency discussed above, in addition to adding value in its own right, also helps to pave the way for improved responses to disruptions and events within the supply chain. If, for example, a shipment of critical parts is running late, an Industry 4.0-enabled plant would be able to determine immediately how much of the current production run could be accomplished without the incoming parts shipment and which other production plans that don’t require that part could be carried out in the meantime with the existing stock levels. In this way, you’re able to minimize the monetary effects of the late shipment.

By the same token, in a modern smart factory equipped with smart sensors on machinery, production planners can monitor machine usage in real time. If a machine seems to be behaving abnormally, or throughput seems to be slowing, planners can identify the issue as it unfolds and take steps to address it---whether that means scheduling some machine downtime tin advance, or adjusting your production workflows to change the way your machines are being utilized. If your factory is especially sophisticated, and features the kind of autonomous machine decision making and cyber-physical systems that are so frequently touted in discussions of the fourth industrial revolution, you might not even need to make these decisions yourself. Instead, the production lines themselves could adapt autonomously to the changing circumstances, thereby adding value in the form of reduced human labor.

Once your factory is optimized to collect data and make it available cross-functionally, you can begin to extract value from one of the most significant benefits of Industry 4.0: big data analytics. With mission critical information about machine usage, production plans, capacity plans, transport logistics, etc., you can train advanced predictive and prescriptive algorithms on your existing operational plans. The uses here are twofold: first, you can leverage your data into improved predictive demand forecasts, meaning that you can more accurately tailor your production plans to your future needs; second, you can create a “digital twin” of your factory in order to simulate the effects of potential changes (meaning both that you can make planned changes with greater confidence, and that you can simulate disruptions in advance in order to find the optimal responses).

If, for instance, you were developing production plans for the upcoming quarter, data from previous production runs and real-time demand information might indicate that one of your products is likely to have a higher level of demand than the other. Since your production flow is optimized for making the two products in roughly equal proportion, you might try to tweak your workflows, testing each new idea on a simulated factory in order to find the optimal arrangement of people, goods, and machinery. Thus, production planning becomes more proactive and less prone to disruption. At the end of the day, this is the reason the smart factory is being developed: to create these new ways of maintaining and adding value in the form of sophisticated digital planning support.

Procurement in the Industry 4.0 Era