What is Quantum Computing?

The powerful potential of quantum computers is significant as they have the ability to transform real-world supply chain problems. Quantum bits, also known as qubits, can occupy more than one state at the same time. As each particle is interdependent on another, they can be linked to one another through entanglement – a key differentiator between quantum and classical computing. Classical 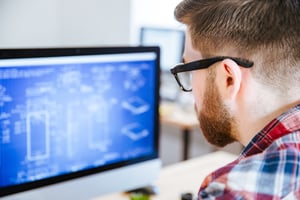 computers are binary, processing information using bits that can only exist as one or zero. Qubits, on the other hand, can process data in states of ones, zeros, anything in-between, and all of the above at the same time. Quantum computing accelerates the development of computational models that take much longer to process using a classical computer. The interaction between qubits can be adjusted to sense one another, allowing the system to naturally shift in a way that consumes a minimal amount of energy.

In entanglement, the quantum algorithm is linked by qubits, each of which in its own undetermined and entangled state. Because of this, countless possibilities are offered, enabling quantum computers to solve problems that classical computers cannot, at a significantly increased speed. As this technology is expensive to produce and still undergoing improvements, it is not widely available. Fortunately, many tech companies are already offering access to quantum computing features in preexisting systems. Until recently, quantum computers needed to be stored in unique conditions within the labs of tech titans. Today, some features of quantum computing are becoming available, and it is predicted that we will see the first generation of commercially available quantum-enabled devices as early as 2025. Particularly in supply chains, quantum computing will revolutionize operational efficiency, solving problems within a fraction of its current time.

Quantum computing is already being applied to many real-world problems seen in the supply chain that classical computing cannot handle, such as the optimal route planning of transportation. Features include tracking weather patterns, inventory levels, and length of voyage, all of which are incredibly pertinent to accurate route planning. While AI can help optimize these processes, it needs the right data to feed it, and quantum computing can take it one step further. Quantum computing is able to look across various decision variables and determine how to pick the most efficient path. With this tool at their disposal, planners can run plans quickly, performing scenario simulations with ease.

Many companies in the automotive industry have been quick to hop onto the recent developments in quantum computing. Volkswagen, in particular, has launched the first pilot project for traffic optimization using a quantum computer. Using a D-Wave quantum computer, they can calculate the fastest route for every participating bus in real-time. Essentially, developers have created a quantum algorithm for route optimization between stops. The algorithm calculates the fastest route for each individual vehicle in the fleet and optimizes it on a real-time basis. Alternative to traditional navigation services, the quantum algorithm assigns each bus a unique route. This allows buses to avoid traffic bottlenecks along the route at an early stage, avoiding traffic jams before they arise. With this solution, vehicle travel times will be significantly reduced, even during peak traffic times, improving traffic flow as a result. This means that not only will vehicles themselves avoid traffic, but they can ensure that they will never be the cause of congestion.

The application of this technology includes two primary components: passenger number prediction and route optimization by quantum computing. Computers will use data analytic tools to identify stops with high frequency at specific times. This combined with anonymized geo-coordinates and passenger flow data, are used for enhanced accuracy. The objective of this is to offer as many tailor-made transport possibilities and ensure the optimum utilization of transportation.

and as the technology develops more, there are hopes that it will be expanded further throughout the automotive industry. In the same way that computing can track passengers and analyze stop frequency, quantum computing can also optimize trucks and buses transporting goods. Stops can be monitored and analyzed to match frequency with traffic patterns, ultimately optimizing route planning. With these advanced analytics, transport companies can save time and space on shipments, ensuring that they are made on time while maximizing storage space.

Furthermore, traffic optimizations and management based on the performance capabilities of quantum computers will be instrumental in providing effective support for cities and transportation vehicles. As traffic is updated, routes can be adjusted to find the most time-efficient course of travel. This will ensure that shipments are made on time, satisfying both customers and companies.

While quantum computing is still in its development stage, it has clear potential for optimizing route planning in the transport industry. Using smart analytics and real-time data, quantum computing will monitor traffic, allowing you to avoid delays, quickly re-route, and travel more efficiently as a result. Time is money, and quantum computing will allow you to save significant time in travel and transport. As the technology becomes more available, companies will be lining up to optimize their operations using its highly advanced planning capabilities.

What Is A Truly Digitized Supply Chain?

On Getting the Most from Your Transport Logistics

What is Multi-Dimensional Monitoring?