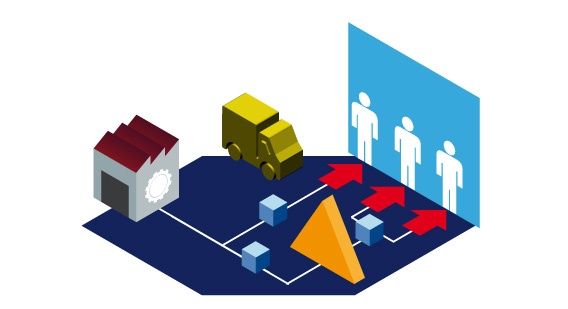 For shippers, logistics managers, and freight forwarders, this game can be thought of a cautionary tale. As you move goods from their place of origin to their final destination, they’ll need to be handled by a lot of different “players” along their various routes, and it’s imperative that you avoid letting things get damaged or degraded during transitions. This has gotten more difficult as trade routes have proliferated and the average number of touches along those routes has increased—but in the digital age you also have more options than ever before when it comes to planning, tracking, and optimizing shipments of goods.

1. They Can Improve Last Mile Efficiency

With the dawn of the digital age, we’ve seen the dawn of digital shipping, which means digital route and tour planning for various shipments are now facts of life for many organizations. Digitizing a process can, of course, radically transform it, meaning that many will be oblivious to some of the more nuanced facets and benefits of these workflows. For instance, digital route planning can have a tremendous positive impact on the last mile. How? By giving planners the visibility and adaptability to move away from static transport plans that don’t account for changing conditions. Instead of planning the last-mile route far in advance, a digital routing workflow can hold off on finalizing plans until the last minute, when the exact state of your transport network (to say nothing of traffic and weather conditions) can be fully mapped out, understood, and capitalized on. If potentially value-additive groupings of items or routing changes pop up at the last moment, planners have the visibility to identify them and the flexibility to implement them.

In the scenario alluded to above, what was it the underpinning your digital workflow’s ability to offer information in real-time and suggest potential routes and tours? It was things like IoT (internet of things) devices and RFID chips within trucks that do more than just collect data—they promote connectivity and help to drive a more cohesive planning chain. Without these technologies in place (some of the very same technologies that are characteristic of Industry 4.0 and Logistics 4.0), planners can’t get enough information to understand all of the options available to them, meaning that they’re unable to adjust their plans in an agile manner. Under these circumstance, efficiency and agility are hard to come by.

Of course, route and tour planning are not the only supply chain processes that are becoming increasingly digitized. With the Industry 4.0 revolution, manufacturing is also becoming an ever more digital and connected process—one that thrives on the visible and transparent collection of mission critical data. In this way, digital route planning and digital manufacturing are something of a perfect match. As logistics providers are able to glean information about production flows and incorporate that information into their planning processes, distinct organizations (or distinct teams within an organization) can create new synergies that add value for all involved. For instance, a manufacturer utilizing digital planning workflows and partnering with digital freight providers might, through integration, see that there’s going to be a squeeze on freight capacity in the near future; they can then adjust their production plans accordingly in order to avoid paying for extra storage space while their items would be stuck in the warehouse.

Now, at this point you might be looking at all of these facts (at least two of which might more accurately be described as benefits) and thinking, “sign me up!” And it’s true that digital route and tour planning can have a big impact on the efficiency and agility of your transport logistics. They do, however, require a high degree of visibility in order to function effectively. Why? Because visibility is a necessary first step for creating the kinds of data streams that advanced digital analytics processes thrive on. Without these data streams, it will be difficult for businesses to maximize efficiency within their transport operations, owing to the persistence of poor forecasts static routes. Thus, it’s imperative that digital businesses do everything in their power to reduce data silos and create the kind of open, highly-visible IT environment that makes digital route and tour planning possible.

5. …But the Resulting ROI Can Be Substantial

The visibility and IT requirements might be high, but that doesn’t mean it’s not worth it. ROI for the kinds of process improvement under discussion can be substantial. Think back to some of the examples we discussed above: if you’re able to reduce your need for buffer stock by creating a leaner, more connected relationship between production and transport, you can save significantly on storage costs. Likewise, if you’re able to increase your rate of on-time deliveries with improved last-mile tactics, you’ll have a much easier time attracting repeat business and keeping your customers happy—both of which will yield returns in the long run. Not only that, but the high levels of visibility and agility that digital route and tour planning workflows add can give businesses new ways of managing and mitigating disruptions (i.e. flexible, on-the-fly rerouting or reconfiguring of delayed shipments). Taken together, you have a huge cache of added value just waiting to be tapped.

Route Planning in the Era of Logistics 4.0

5 Steps for Optimizing Your Shipping Routes