Press Distribution in the Digital Era 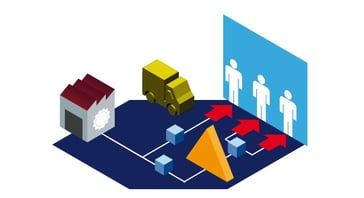 As newspapers have increasingly faced existential threats from television and internet news sources, the industry’s already-thin margins have gotten even thinner. This has led many outlets to evolve and adapt to the new digital realities by supplementing their print division with digital media, or by switching to the digital media entirely. Many others, searching for any opportunity to cut costs and develop a leaner supply chain, have been experimenting with the way their papers are delivered. This has gone wrong a lot more often than it’s gone right. One company tried to use the United States Postal Service to deliver papers when it became clear that their existing carriers couldn’t maintain profitability—to disastrous results.

Still others have attempted to combine distribution networks in order to create synergies—this too has often led to late deliveries and general confusion, which only puts further pressure on a given paper’s bottom line, since these types of issues can lead to cancelled subscriptions. Is the lesson here that newspaper distribution can’t be further optimized, and papers should look to other means to cut costs and drive up revenue? Or is there something that connects these failures that doesn’t preclude the possibility of more agile, adaptable logistics operations within the world of press distribution?

One of the reasons that optimization is so hard to come by in the first place is that the process of putting out a paper and delivering it to people’s doorsteps, newsstands, and coin-op paper dispensers is already a high wire act of the highest order. Most papers publish multiple editions during the day, not to mention different editions for each of the geographic areas that they cover. Each of these editions needs to be ready on an extremely tight schedule, such that the correct bundles can be loaded into the carriers’ vehicles and passed out based on a route devised by whoever is in charge of press logistics. Typically, this structure becomes more and more complicated as the day goes on, because the editions that come out later in the day are often more location specific, meaning that papers have to be grouped together and routed for distribution somewhat more carefully.

Since this is a system that dates back to the early days of newspapers, these are processes that have traditionally been done by hand—not just the distribution itself, but the planning, coordinating, and routing, as well. When people worry about the emergence of digital culture overtaking print media, they’re usually worried about digital content in particular, but it’s also the case that digital logistics workflows threaten the sanctity of these traditional ways of doing things. In the modern era, printers are in competition not just with other, similar products, but with the entire world of e-commerce, which continually inflates consumer expectations with ever-more-agile character of the typical integrated supply chain. Not just Twitter, but Amazon is putting enormous (albeit indirect) pressure on this venerable old industry.

So, we’ve laid out the structure of a typical newspaper distribution workflows. But what, exactly, are the challenges that press logistics managers face in getting the right edition to the right place at the right time? First of all, it’s important to create alignment between printing schedules and distribution schedules, i.e. making sure that the relevant papers are ready at the same time that the carriers are ready to transport them. You don’t want to let papers pile up unmoved while you wait for a delivery truck or van, just as you don’t want a fleet of carrier vehicles idling on your loading dock while drivers look at their watches wondering how long they can realistically afford to wait for you.

Once these two processes are aligned, the next challenge is making sure that the papers are being routed from the loading area to their final destinations in an efficient way. This might mean combining shipments strategically at various points along the route to manage different editions and geographic areas. It might even involve shipping most or all of the papers to a second distribution center that’s more central to the distribution radius—you can see the level of complexity that we’re dealing with here! These considerations are just the tip of the iceberg, and, as you can imagine, they can be difficult to optimize, refine, and measure entirely by hand.

At this point you might be wondering what, exactly, the alternative is to performing these processes by hand? We’re glad you asked! Just as the digital revolution is adding pressure to these processes, so too can they help to alleviate that pressure with smart process improvements. As printing workflows become increasingly open and visible (an important next step following the digitization that they’ve already been undergoing for years), aligning them with carrier schedules will become more and more efficient. Not only that, but planners can collect and leverage data from these printing workflows (through a combination of visible digital planning records and IoT devices position throughout the production stream) in order to create predictive analytics flows that better predict timing for future print runs. From there, live traffic and weather analyses can be used to inform smarter routes for carriers, which can then be incorporated into route plans in turn.

On its face, this might not seem like a radical reimagining of the existing press distribution paradigm. But the key difference between a digital workflow and an analog one isn’t just that planners can utilize more data; it’s that that data can be analyzed within a larger context, effectively taking the guesswork out process improvements. Rather than planning a change and hoping for the best, you can simulate changes within a digital environment to model their potential effects. This means that you can increase your certainty and your agility at the same time, refining your plans over time in such a way as to reduce late deliveries and total travel time (reducing the costs associated with disruption and decreasing fuel and carrier costs in the process). In this way, digitization breeds optimization.