What Is the Future of the Automotive Supply Chain? 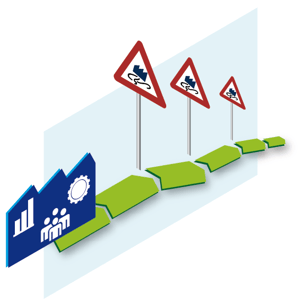 Picture a scenario in the near future: you’re driving down a long stretch of highway between your home and a vacation destination a few hours away, when all of a sudden your car gives you an alert suggesting that you pull over and wait for assistance. You’re confused, and maybe a little annoyed, but you know that if your car’s sensors are going off there’s probably a real issue at hand. Luckily, your car didn’t just alert you that something was amiss—it also alerted a nearby garage, giving a detailed account of which parts the issue affected. Thus, within five minutes a repairman pulls up beside your car.

He doesn’t need any explanation, and once he’s taken a look he goes back into his truck to get the exact parts and tools he needs in order to get you up and running again. Once the repair is made, his systems automatically send data back to the car dealer about the issue and the use of parts, so that the manufacturer knows a) the incidence of failure for a particular system or process, and b) that they need may need to produce more of the part in question. Because the situation has been so well documented, you can count on an equally efficient fix if the issue ever crops up again.

The Internet of Things

Given the advancements that we’ve made in technology over the past few years, the scenario above shouldn’t really seem too far fetched. In fact, the integration of internet of things (IoT) devices into various touchpoints on the automotive supply chain is changing the fundamental nature of how car owners, dealers, manufacturers, and suppliers engage with one another. In the example above, for instance, IoT devices within the automobile itself made it possible for the driver and the repairman to receive alerts in real-time, staving off a breakdown that could have been much more costly to everyone involved. Without these sensors, it’s likely that the driver would have continued along the road until the relevant part actually failed, potentially putting him in physical—not just financial—danger.

Of course, it’s not just the automobiles themselves that are equipped with these devices. Increasingly, the entire automotive value chain is able to offer real-time production and logistics feedback. Armed with technical capabilities designed to improve production visibility, planners in automotive plants and other production managers are quickly finding themselves in a position to stave off disruptions and refine ongoing processes by analyzing IoT data and implementing changes driven by that data. This means that auto industry as a whole is poised to become smarter and more data-driven, owing to a more complete, holistic understanding not just of manufacturing processes but of automobiles themselves.

Mobility as a Service

Now, from a certain perspective, it’s lucky that value chain improvements are empowering smarter production and management of vehicles, because the way that people use vehicles (and the way that people view mobility) is changing rapidly. The emergence of ride-share apps, car-sharing services, and similar innovations are leading fewer and fewer people to think of automobiles as commodities, while more and more think of them as services. This puts auto manufacturers and automotive supply chain managers in an unusual position. Why? Because they’re increasingly going to be called upon to produce vehicles intended for use by more than one driver. As a result, improved connectivity and the ability to extract mission critical data from vehicles themselves (rather than users) is going to become virtually indispensable. After all, without these capabilities, things like customer feedback and usage data would become scattered and disconnected by a diffuse userbase; automakers would lack usable information when it came time to design new products, analyze performance, and determine future sourcing requirements.

In order for the type of connectivity and information-sharing being described above to be truly value-additive, it’s crucial that the right information be made available to the right people at the right time. It’s not enough for a car to alert a manufacturer that a particular part has to be replaced—on the contrary, that information has to make its way to inventory planners and production managers, so that they’re able to track and meet demand for that particular part in the long run (they might for instance, see that inventory levels for the part were getting perilously low, and thus produce a few more to stock). By the same logic, performance feedback must successfully make its way to product designers, so that they can improve upon their designs over time. Achieving this level of information transparency within your organization might seem like a difficult task, but any automotive planning solution worth its salt should make this relatively achievable.

Finally, we get to one of the most high-profile drivers of change within the automotive supply chain: customization. The broader conversations surrounding Industry 4.0 have tended to mention 3D printing (also known additive manufacturing) by name, and this technology certainly has the potential to be transformative within the automotive space—not just for the production of customized parts and products, but for the creation of a smarter, more diffuse value stream.

Let’s think back to the IoT-alert example we used above. What if the affected part hadn’t been readily accessible for the repairman? Well, in a supply chain with additive manufacturing capabilities, the part could conceivably be “printed” at a nearby plant and quickly transported to the relevant location. In this way, you could avoid potentially time consuming parts shortages, while also saving on transportation costs from plants that might be farther away. This example barely scratches the surface of what might be possible with this technology—but the upshot here should be pretty clear: as this technology takes hold, the automotive supply chain will continue to reorganize itself around smarter, leaner workflows. As with the effects of ride-sharing apps discussed above, these changes will continue to put pressure on those within the automotive supply chain to boost connectivity and data visibility internally. Why? Because the clearer a picture you have of your value chain operations, the more effectively you can leverage new technologies as they emerge.