S&OE in the Automotive Industry 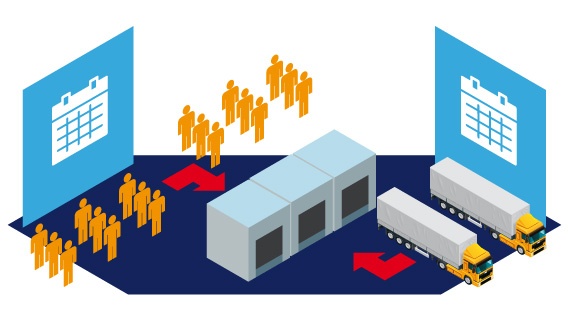 The actual production of automobiles on the factory floor has been getting more efficient for decades. In the ‘80s, it would take General Motors about 40 labor hours on average to produce a new vehicle—today, that number is much lower. Since 2007, Toyota’s average labor time per vehicle has dropped from 29.4 hours to 17-18 hours. This is an encouraging trend from a planning perspective. And yet, we know that in reality the process of getting any single car made starts well before the stamping and welding. After all, the 30,000 or so parts that make up a typical car have to get produced first, and even then there are long lead times involved in the sales and planning process before the materials and time get allocated to a particular vehicle.

Given that even the most efficient automotive production process is a long haul, you’d think that production managers would clamber for any sort of process that helps them get over the finish line in the most efficient way. For a while, S&OP (sales and operations planning) was considered the next big thing—giving planners a process for matching supply to demand in an integrated manner over the course of a given month or quarter. But in the Industry 4.0 era, it’s possible for planners to get even more granular with the way that they’re tailoring complex production processes to demand realities. How? By implementing S&OE (sales and operations execution).

We’ve been over the difference between these two functions a few times on this blog before—so let’s just give a quick recaps. While S&OP covers planning cycles on a roughly quarterly basis, with the intention to align supply with demand, S&OE covers a weekly to monthly timescale, specifically working to adjust daily supply chain operations to keep longer term plans on track. In the automotive industry, this can be rather a daunting task. Why? Because S&OE planners are essentially the ones who are tasked with the most efficient management of all 30,000 raw parts, from sourcing to transport to storage. This may seem like a lot to track—and it is—but it’s also the only way for businesses to maintain an element of leanness and keep waste to a minimum.

Of course, the fact that these two processes are so closely related does present challenges, particularly in the automotive industry. These workflows need to be separate but integrated, otherwise you risk each one becoming less efficient over time. For instance, if your S&OE process isn’t clearly defined, planners might spend their S&OP meetings haggling over inventory space and trying to schedule extra production shifts, leaving them with less time for the longer-term planning that actually powers the value of the S&OP. This is obviously less than ideal as a situation, but it might easily arise if S&OE planners aren’t presenting the rest of the company with a clear visualization of real demand levels, transport plans, and inventory tactics. To avoid this, these two distinct processes need to be highly visible to one another, potentially involving some shared IT infrastructure.

In the section above, you hopefully got a sense of how the S&OE process can play out in the automotive industry. Because automotive production workflows are some of the most complex industrial programs around, keeping tight control over inventory and transport is arguably more important in an automotive context than in the context of a less complex product. The more parts there are to keep track of, the more opportunities there are for waste and disruptions, whether that’s in inventory usage or transport flows.

If, for example, we imagine a production network that includes a few factories and a few parts warehouses, with established transport routes between the various nodes, you quickly reach a point where the interplay between each element is too complex for a human planner to manage by hand. In order to optimize the routes that tens of thousands of material take from their suppliers to the finished product, planners need to be able to run advanced analytics on a wide variety of supply chain data sources. This requires digitization (such that planners can visualize the location of parts even as they’re in transit, all while keeping tabs on incoming orders and the hypothetical production timelines that they represent), a high degree of visibility, and technology integration that actually powers the kinds of analytics processes under discussion. S&OE processes are based on these kinds of digital workflows, and as such they are uniquely suited to managing complex supply chain environments and keeping longer term initiatives from going off the rails.

At this point you might be thinking, “That’s all well and good, but how does this make its way back to my bottom line as a manufacturer?” It’s an excellent question, and the answer is in some ways pretty straightforward. Let’s imagine that each part that goes into a completed automobile has a certain lifetime cost: this includes not just the cost to purchase the part from your supplier, but the cost of transporting it to the warehouse, the cost of storing it (multiplied by the time it actually spends in the warehouse), and the cost of transporting it. All of these considerations help form the basis of Plan for Every Part. It’s easy to imagine how those costs add up, but it’s often hard to imagine how to bring those costs down. Sure, you could transport parts more efficiently, and you could reduce the time they spend being stored, but both of those goals have historically been hard to achieve.

This is precisely where S&OE comes in. Based on digital technologies, S&OE planners are able to tweak production flows, transport, and raw material ordering in such a way to decrease the cost of each part. This is obviously just one facet (albeit a large one) of the whole S&OE flow, but it gives a clear representation of how S&OE planners can directly improve a company’s bottom line—all above and beyond the sometimes less-tangible accomplishments like keeping S&OP plans on track and offering an up-to-date snapshot of the whole supply chain.

How S&OE Reduces Risk in the Automotive Supply Chain

Optimize Your Inventory Management with These 3 Strategies

How Operations Planners Can Develop a Modern S&OP Strategy