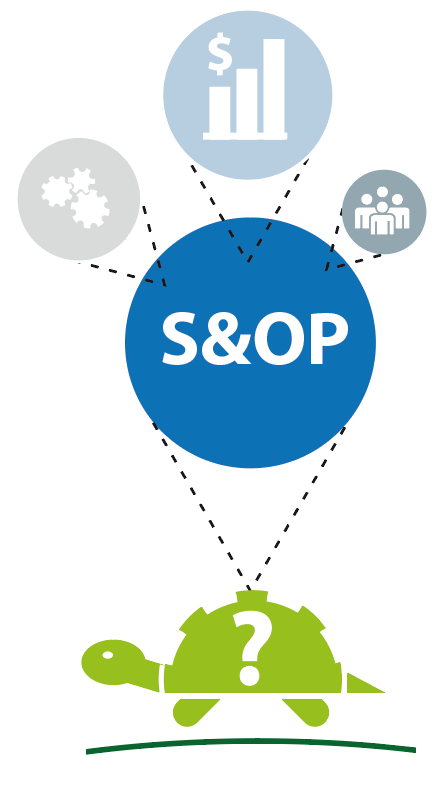 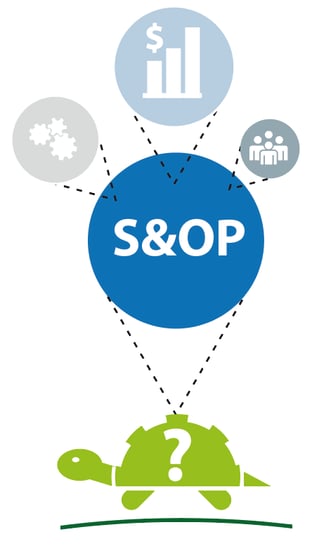 Raise your hand if you’ve heard the story of William James giving a lecture on the structure of the galaxy. After the lecture, an old woman comes up to him and says that his theory (in which the sun is at the center of the solar system) is no good, because the world actually rests on the back of a giant turtle. When James asks his interlocutor what the turtle stands on, she responds: "You're a very clever man, Mr. James, and that's a very good question… but I have an answer to it. And it's this: The first turtle stands on the back of a second, far larger, turtle, who stands directly under him."

James naturally asks the woman what’s beneath that turtle, and she replies, “It's no use, Mr. James—it's turtles all the way down.” We bring this story up because supply chain planning can often feel like it’s turtles all the way down. After all, your company needs a long term strategic vision—but what’s in place to support it? An annual or biannual planning process. Beneath that? A quarterly S&OP process to help create high level alignment between expected demand and throughput. For a while, S&OP was the lowest “turtle” on the ladder. But nowadays planners are realizing that they need something that goes even deeper in order to support those quarterly plans. This is where S&OE (sales and operations execution) comes in.

Okay, first things first in our crash course on S&OE: What is it? Essentially, its goal is to bridge the gap between longer term S&OP planning cycles and actual daily and weekly supply chain occurrences. An S&OP planner might sketch out the expected number of orders for the coming quarter based on advanced predictive analytics, plus a general plan for how to source enough raw materials, produce enough products, and transport enough freight to meet that demand. Typically, these longer plans leave something to the imagination—specifically when it comes to inventory management and transportation planning.

On some level, this is a savvy way to plan out your supply chain operations. After all, how many of you can tell us exactly what the distribution of goods in your warehouse is going to look like 3 months from now? That said, at some point you will need to gain some clarity here, which is when S&OE planners should step in. By monitoring demand levels and transportation options in real time, S&OE planners make small adjustments to inventory levels and transport plans in order to keep your longer term strategic goals on track.

How Does It Add Value?

Like we said above, this process is meant to bridge the implementation gap between quarterly plans and daily supply chain activity, which means that its main way of adding value is by improving the value of your S&OP process. Let’s say, for instance, that you find yourself in a situation where demand for a given month basically met expectations, but it wasn’t evenly distributed. The first week of the month there was a huge spike, and then the second week saw a big drop off. In an environment without S&OE, planners might be tempted to overreact to the initial demand spike: they might decide that their forecasts were off and that they need to immediately speed up production in order to meet higher-than-expected demand. If they did so, they’d find at the end of week two (following the dip) that they had a warehouse full of unsold product that had been produced in a rush (meaning more defects than usual), and they’d have to subsequently ramp production down to re-stabilize. This might mean low capacity utilization or machine overuse due to new production ratios that heavily favor one product over another.

This kind of overreaction is exactly the kind of thing that an S&OE planner would be positioned to stave off. When the demand spike came in, the S&OE planner would check existing buffer stocks to see if the company could meet demand without adjusting production plans. If that proved to be possible, the planner would look into cost effective freight options for transporting the goods on a different timeline than expected. Going into week two, they would be waiting for the demand situation to unfold—and when demand dropped they would take the opportunity to replenish buffer stock. In this way, most of the costs associated with demand volatility could be reduced or eliminated.

How Do You Implement S&OE?

Successful S&OE deployment depends on access to real-time data from suppliers, transport partners, and elsewhere. This means that in order to create a robust S&OE workflow you do to a few things.

By following these steps, you should be able to work to close the planning gap and improve your agility and responsive to demand, all while staving off potential supply chain disruptions.

What Pitfalls Should You Watch Out For?

So far, we’ve seen how and why S&OE can be valuable to manufacturers—but there are a few pitfalls and hurdles that businesses sometimes encounter in its adoption and implementation. By and large, the most common pitfall is failing to provide the requisite level of visibility for planners. If your IT infrastructure doesn’t give planners insight into one another’s processes, or if you suffer from data or decision-making silos, your S&OE workflows are likely doomed to failure. By the same token, if your supply chain partners create additional information, that could pose a barrier to success. Ultimately, because the data velocity and visibility requirements for this process are so high, it’s difficult to adopt S&OE in a vacuum. Instead, it should be considered a key touchstone on the path to digital transformation and Industry 4.0 readiness.

Is Your ERP Hurting Your Sales and Operations Planning?

How Industry 4.0 Will Improve Your Demand Forecasts