5 Interesting Facts About the IoT 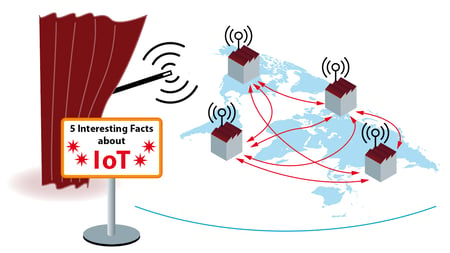 Remember that one part of The Wizard of Oz? The one where the wiz comes out from behind the curtains? How was that one little guy able to control everything from his perch back there, without anyone being any the wiser? That I can’t tell you, but I can tell you we’re getting closer to a 21st-century version with the continuing maturation of the Internet of Things (IoT). The emerging technology that powers the 4th industrial revolution, Industry 4.0, is giving us a glimpse of what it would have been like sitting back there, with a view into all the goings-on of our realm.

But just what is the IoT? What is powering this revolution of transparency and data availability? What is it that forms the backbone of a digital supply network and is at the core of a digitized supply chain? In short, an IoT device can be defined as:

Any device with an on-off switch that connects to the internet.

It’s what enables your warehouse monitoring sensors to transmit data about shelf space, in real time, to your back office at headquarters. It’s what enables that data to be combined with the data coming in from other warehouses, the factory floor, and the shipping fleet around the globe. It’s even what enables your logistics planners to stay up to date with conditions inside the containers delivering product to the customer. Without the infrastructure of IoT devices collecting and transmitting data about production levels, machine maintenance needs, shelf space, and weather conditions in the South Pacific—there would be no advanced analytics engines analyzing it to produce the most accurate demand forecasts ever seen. Are you seeing the comparison to the wizard now?

Ready to jump in? Good. Get ready for 5 of the most fascinating facts about this piece of forward-thinking business infrastructure known as the Internet of Things.

1. The IoT Provides a Bridge Between the Physical World and the Virtual World

This is the aspect of the IoT that will make it absolutely indispensable in the coming years. Also known as “edge computing,” we’re talking about the work taking place at the edges of a network, most often the edge between the real world and the virtual one. Sometimes referred to as “cyber-physical” computing, the IoT is what brings the two worlds close enough to work in harmony. Think about your security cameras at the factory. These cameras are literally recording the real world and sending that recording to a storage facility on your cloud account so you can have a record of everything that happens at the loading docks.

2. It’s Been Around Longer Than You Think

The first “official” IoT device was a Coke machine on the campus of Carnegie Mellon University in Pittsburgh, Pennsylvania. The year was 1982, and students wanted to be able to know in advance if newly loaded cans of soda were at peak coldness, so they rigged the machine to report this information to a computer in a nearby office. The idea has been around even longer, however, if you consider that ATM machines have been reporting cash levels back to the central bank servers since 1974. The term “Internet of Things” traces its history to 1999, when Kevin Ashton used it in a presentation to Procter & Gamble in describing how they needed to be able to track inventory levels of one product that consistently sold out. Yet, despite this history, it’s estimated that 87% of the general public does not know what IoT means.

According to one report, more than ⅔ of companies investing in IoT can’t find the talent they need. And according to a study conducted by leading internet infrastructure company Cisco, ~80% of companies investing in IoT fear that they lack the talent and skills to make use of the data they’re collecting. The unique combination of computer hardware requirements, software programming skills, and data science involved in a proper IoT project is at the root of this shortage. The job market just hasn’t had time to develop people with this set of skills and prepare them for working in the field. That said, if your infrastructure is ready to integrate IoT data streams with the data coming in from other systems, this doesn’t have to present such a daunting challenge.

4. The Value is in the Data

At a fundamental level, the IoT is about data. Sensors in your factory are collecting it and transmitting it, and the servers are analyzing it. It’s this data that enables the cost savings, productivity gains, and preventative maintenance capabilities that form the core purpose of an IoT deployment. Back to Cisco: they estimate that in the year 2019 alone, IoT devices will be processing in excess of 500 zettabytes of data. For scale, that’s roughly equivalent to 250 billion DVDs or 36 million hours of HD video.

5. All That Data Can Present Challenges

The proliferation of connected devices presents an incredible array of possibilities. And with those possibilities come an equal set of challenges. One that is just beginning to be fully explored is that of data security. A recent example will best demonstrate the issues. A casino in North America was hacked in 2017. How did the hackers gain access to the personal information of the casino’s employees and customers? By breaking into the decorative fish tank in the casino’s lobby. The high-tech tank had an IoT sensor that reported conditions inside the tank, information like water temperature, salinity, and cleanliness were reported to the operations manager’s computer in another area of the building so they could maintain the tank and keep the fish happy.

Industries from healthcare to manufacturing to finance all stand to receive a major bump in productivity, slashes to overhead spending, and more by implementing this set of emerging technologies. This doesn’t come without some things to watch out for. Just like the Wizard of Oz, one central power can be easily corrupted or compromised. Data silos present their own set of potential risks, as does a lack of visibility into the supply chain. IoT devices can be a great first step, something to test the waters before you commit to a full supply chain upgrade. I hope this set of facts whet your appetite to find out more about how your company might want to deploy Industry 4.0 technologies like the Internet of Things and how your whole value chain can share in the benefits possible.